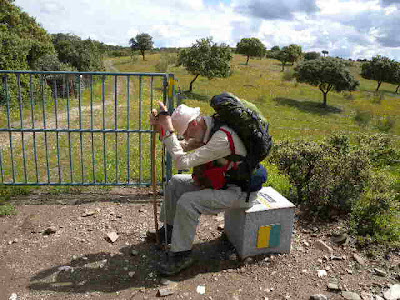 A writer, having contemplated a blank piece of paper for many hours, has to be forgiven for throwing in the towel.  Last night I listened to the rain beating down on our window blind, and the bus marked "Salamanca", which pulled in outside our hostal as we were leaving, suddenly became an attractive proposition.

But we were both glad we did not succumb: it´s been a great day on the Camino.  The rain held off till after we arrived here in Galisteo, and for the most part it was sunny (but not too hot), with high and beautiful cloud formations.  And the scenery ranged from distant views of blue remembered hills (100kms. away?) to cool pine woods and meadows carpeted in purple and yellow with wild flowers.

This time last year I bought a St. James´ shell to take with me when walking part of the Voie du Puy in S-W France: it has kept me company again this year, till today when I sat on my rucksack, forgetting it was underneath. Crack! It was not a good day for sitting: the way is marked by occasional large stone blocks with engraved outlines of the famous Roman arch of Cáparra, which we walk through on Saturday. I collapsed onto one for a rest, forgetting the rain which collected in the engraving. Then we both took another wetting, having to remove our boots to cross a swollen river: quite refreshing in fact - we should do it more often.

So, another 28kms. has been clocked up, and we are off to explore the walled town of Galisteo.
Posted by Martin Davis at 18:02

No, not the autobus! Put it to one side and push on th Gallisteo a lovely walled town, sadly Caraboso you next likely spot to stay is not as medieval bit is the closest point to a great walk onto the Caparra Arch the next day. Pack lots of water and food and follow the cubes NOT the yellow arrows on this section as the road has cut through it all and it's a long and confused walk to Aldanueva del Camino!

Victoria's grandfather was mayor of Aldeanueva! Look out for the copy of Guernica. Hervas- buy the local produce